I mentioned a shopping list in my previous post, and my trip back from highsec with a cargo full of loot turned into a small adventure worth writing about. For reference the chain looked a little like this:

I hate shopping, both in the real world and in New Eden. So when I finally undocked from Rens I was almost happy about the 22 jumps my hauler would have to perform to get me to the highsec entrance of the moment. I plotted the route and merrily set about jumping from gate to gate. In between clicking warp and jump on my alt I was scouting out the 4 wormhole jumps required to get home in a cloaky proteus on TJ.

The chain appeared calm, nothing much on D-Scan to be aware of so I put my proteus into a lazy 30km orbit around the entrance from highsec, occasionally spamming D-Scan. My hauler was 3 jumps out when things started to warm up a little. I noticed an Astero blipping on and off scan so I docked up my hauler and proceeded to check out the chain again on TJ. As I entered warp one, two and then three Dominixes appeared on the scanner – I narrowed my scan radius and pointed my camera in the direction I was warping to find that they had appeared on the hole I was about to land on.  I was due to drop out of warp 10km from the hole, certain muscles clenched a little as I slowed and landed on grid with the battleships – luckily well away from them. 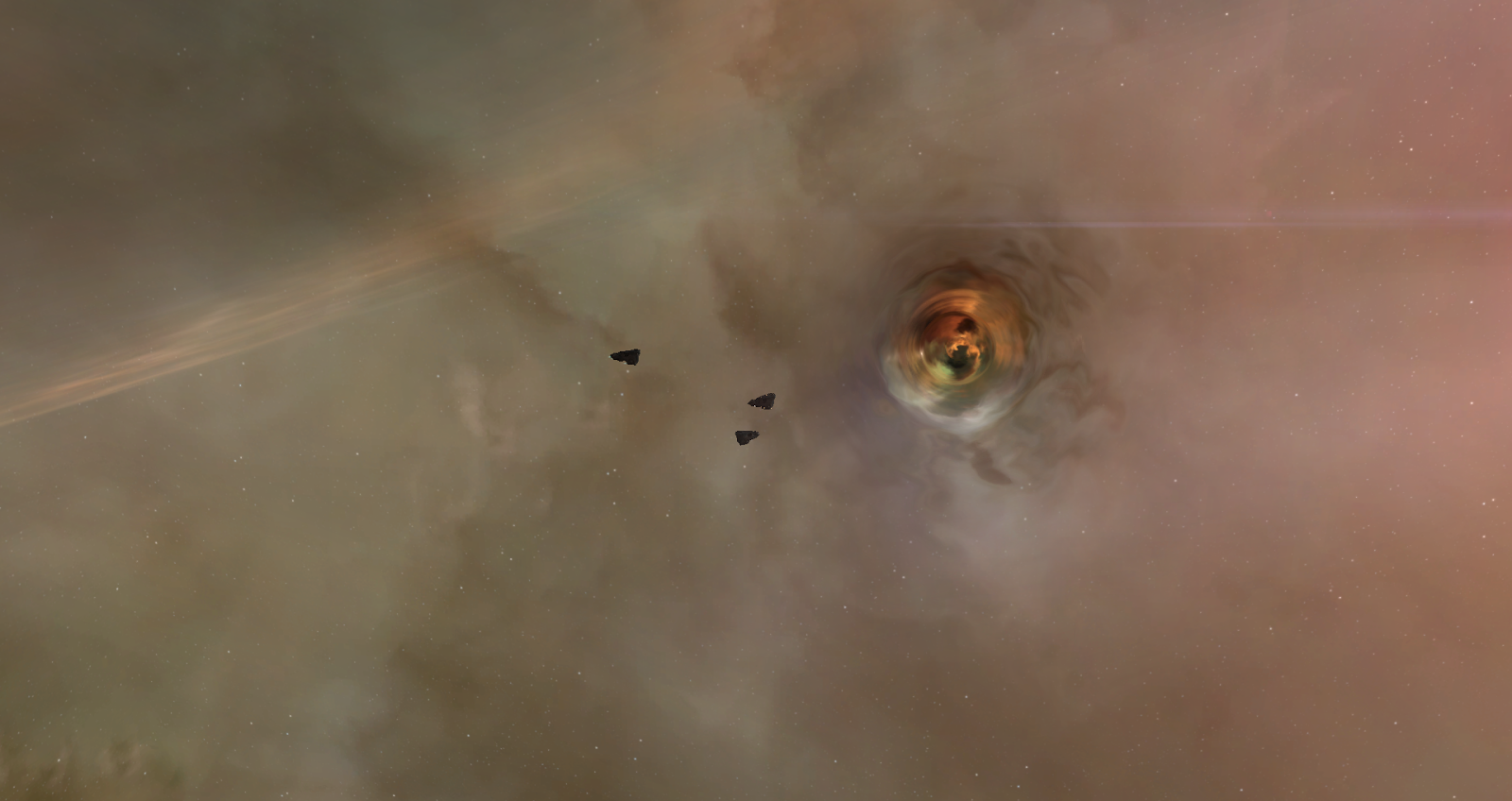 Flight of the space potatoes

With my cloak still on I turned around and pulled range and proceeded to sit and watch as the Dominixes dropped a range of sentry drones and geckos and proceeded to set up a cap-chain, I hope they weren’t waiting for me! I pulled up the pilots info and discovered they were from Chained Reactions and local to the system. My corp was light on numbers at this time, but Pancocco moved up the chain to sit the other side of the C3a hole and observe.  We put the word out on Jabber but unfortunately most people were still at work or otherwise engaged so we settled into watch.

One of my favorite things about wormholes is the ability to remain 100% un-noticed and just watch other people (I promise I don’t carry this hobby into the real world). After five or so minutes of watching, a Hyperion and fourth Dominix appeared and started to role the hole, which thoroughly irritated me, mainly because I was on the wrong side and also because I’d just done 22 jumps in a hauler! I was debating whether or not to just make a run for it and finally decided what the hell – they’re battleships I’ll be long through the hole before they can even think about locking me!  With that I turned my ship around, bounced off the nearest moon and dove into warp just as Pancocco called the hole had closed.

I was now heading straight towards a fleet of 5 battleships at 0. We both laughed at my predicament on coms as I fell out of warp 2229 metres from the nearest ship, once again my cloak held and my luck was in! I slowly navigated away from the not so gentle giants as Pancocco dropped probes in C5a.

I got my Proteus back to the now end of life (EoL) highsec hole to find an Eos command ship there – I weighed up my options and decided not to fight. It was pointless anyway being on a highsec hole and I’m still a little timid after my last Proteus loss.  As I activated the wormhole so did the Eos and we landed on the other side together, he then proceeded to try and persuade me back in for a fight – I don’t think he realised I’d seen the rest of his buddies in there but we had a lovely chat and I warped off to the nearest station as Pancocco announced he had found a new C3a with a highsec static, once again my luck was in! I opened up my hauler once again and prepared to put in a new destination and when I saw Pancocco appear in local…. I couldn’t believe my luck – we had re rolled straight back into the previous C3a. As I already had the bookmark for the entrance I immiediatly warped my hauler and proteus back and jumped before the guys inside had any chance of figuring out what had happened. Me, my hauler alt and Pan burnt back down the pipe successfully and about two minutes after got a bemused message of a scout form Chained Reaction asking what the hell we had just done and how we had managed to get a hauler un-noticed through there ‘camps’.