Don't stare at the sun!

My first day out on my own was full of lessons, for me at least. I jumped from highsec into a C2 and poked around the system, seeing nothing on D-Scan I dropped my probes and looked for another wormhole. I found another C2, and jumped in.  Refreshing D-scan I saw an Armageddon Battleship, a Helios and a Buzzard Covert Ops along with a tower. Activity! Hurrah, the first active wormhole I have been the ‘badguy’ in!

I set about locating the PoS, I’m still really slow at doing this, but I hope with practice I will get better.  During the time I spent D-Scanning for the PoS I saw the Geddon disappear and reappear a couple of time, I assumed it could be rolling a hole.  I finally found the PoS and entered warp, landing about 70km away.  Just as I landed the Helios swapped for an Epithal, an industrial specialized in hauling planetary interaction products – game on!

I switched my view to the Epithal so I could use the tracking camera and saw it aligning, but as it did it aligned straight for the bright blue sun in the centre of the system – and I couldn’t make out the planet it went towards, there were 4 planets in near the sun so I took a wild guess he went to the plasma planet (I assumed plasma because it is a rarer planet). I came out of warp 10 km away from the POCO to see no ship, I was disappointed so I turned around and warped back to the POS sitting and waiting. The Epithal was already back and aligning to another planet, in the sun again! I tried to follow him again but guessed wrong and landed at another abandoned POCO, I sighed and thought I’d wait. I pinged D-Scan constantly and saw the Epithal disappear and the Helios reappear, I had been foiled by a lack of sunglasses. I was a little annoyed but something I’m learning quickly is that this game revolved around patience.  I warped around the system a trying to see if I could find the Geddon, but he had gone as well.

After this frustrating disappointment I decided to move on, I dropped probes and found an EoL C1. When my proteus materialized on the other side I hit D-Scan and saw a Thanatos and a Nidhoggur, I checked the system again to make sure it was a C1 and it was – talk about overkill!  Now there isn’t much I can do to these ships a lone, but I have never actually seen a carrier in space before – so I thought I’d find the POS and do some sightseeing! Some might consider this a wasted evening, no ISK was earnt, no pew was had. I don’t think that’s the case, I learnt that I need to be quicker with my decisions but practice makes perfect! I also saw something shiny for the first time! Hopefully tomorrow will bring a kill!

Imagine passing your driving test, and then deciding to go out on a solo 4x4 tour of the Sahara. Translate that into internet spaceships and you have the challenge I have set for myself.  Inspired by Baby Dady’s blog ‘Bob’s Disciple’ I am going off on my own into W-Space in search of targets. I am taking my cloaky Proteus out into the wilderness of W-Space; I am very excited but also a little apprehensive.

I set out yesterday, jumping down our chain into a very convenient highsec three jumps from Jita.  I stocked up on supplies and as I write this my Proteus is being polished and waxed in Jita 4-4 waiting to go. I plan on jumping around highsec until I can find a decent wormhole and branch off away from people and towards glory! I don’t plan to return until my Proteus is destroyed, I have accepted its loss already and moments before its death I will offer it to Bob and ask him to bestow greatness on my next one.

I want to use my trip as a learning experience, luckily my new corp is very supportive and I’m sure I will be bombarding them with questions. I am sure this will be a fantastic learning opportunity and hope to take several things from it:

I think my trip will help me with all of these things (providing I don’t explode too soon!). I will keep this blog updated with every day’s activities, but perhaps I will keep it vague if I am actively hunting people.

The solution to solving any problem is diving headfirst into it.

Perhaps this advice isn’t so sound if your problem is physically solid in nature but in Eve at least, what’s the worst that can happen?

It is this attitude that helped me decide on my new corp. I have conversations with many, many corps ranging from C1 guys all the way up to the C6 corporations.  Now I consider myself very inexperienced as far as wormholes go, in both skill points and physical pilot experience. Due to this lack of experience I chose to join a C5 > C5 PvP oriented wormhole corp – and idea that I still think is crazy, but the right one.  I decided to jump in higher up the chain because I believe that there is only one way to learn, and that surrounded by the right group of people anything is possible.  The guys I have joined seem great, and more than willing to help a squishy space learner. So from now on the stories should start flowing nicely!

Imagine moving everything you own (in my case this is not a fat lot) through a door that may or may not contain several people actively trying to hunt you down and murder you. Oh and on top of that the door might slam shut at any time.Lesson number one: travel light. To me, the logistic of wormhole life is one of the worse things about the whole experience, but I fully acknowledge it is a necessary evil – and I’m sure in future I will take joy out of disrupting other peoples moving.

About thirty minutes after deciding to join up I had shifted my proteus and deimos (thanks to a very lucky highsec entrance) and was on my way back to Amarr to grab a couple of cheaper PvP cruisers when somebody in the alliance chat asked if anybody wanted to kill a procurer.  Always game for some fun, and feeling the need to prove I wasn’t afraid to jump into a ship and shoot stuff I span around in my shuttle and head straight back.  By the time I was back I had gotten onto teamspeak, introduced myself and hopped into my Deimos.

During my travel back the miners had realized our scout’s presence and sadly run away.  Shortly after however, their greed and need to chew on ice became too much for them to resist and three procurers were reported in the belt with a drake and deimos floating around in the system somewhere.  It was then that I was assaulted with a terminology I didn’t understand “jump to NSF on my word”. I started to panic a little, not wanting to appear the idiot and mess up the gank I started clicking around on everything I could until I figured that NSF is ‘Nullsec hole F’, and breathed a sigh of relief as I found the bookmark and aligned.  After a fleet warp I found myself outside the hole waiting for the command to jump through. A saber was going to warp a second before the fleet as a whole entered warp and hopefully trap the hapless miners. 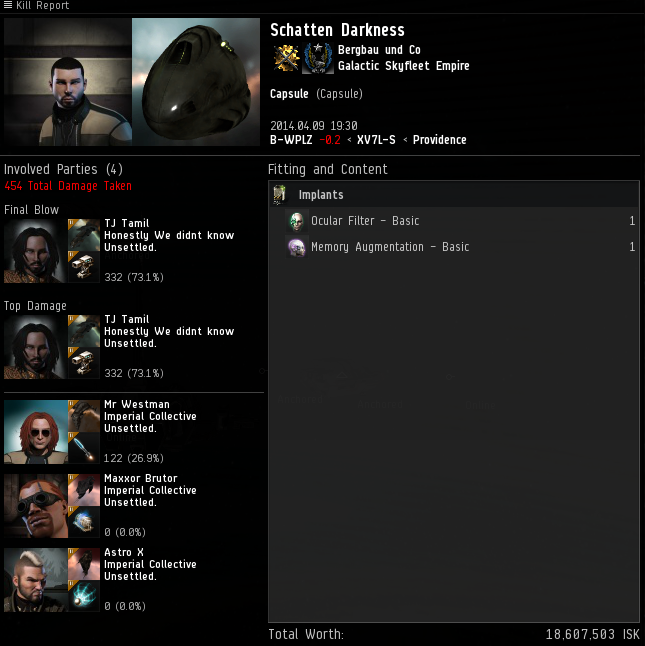 I couldn’t ask for more on my first evening in the corp – I got most of my stuff in through a nice highsec and got a gank within an hour of joining. And best of all, I don’t have to look at the inside of a station anymore! I’ll leave you with the view out of the window! As quickly as it started it’s over.

The corporation that I joined up with great hopes of learning about and succeeding in wormhole space is closing. Now I am disappointed, but the only reason our CEO has decided to shut up shop is because of a demanding new real life job, which you can’t hold against anybody - so there are no hard feelings!  I have really enjoyed it so far, so I fully intend to move back into W-Space as soon as I can.

K-space already feels claustrophobic; there are far too many people and I’m desperate to get back into the dark back alleys of Eve, but I’m going to take my time.  I am going to look around for a corp the really suits me, and that I think will offer me a new home for the foreseeable future.  I have often put little thought into choosing a corp, and that is reflected heavily by my employment history. So this time, I’ll do it properly.

For me there are several key questions that must be answered:

What do I want from a new corp?

The most important thing for me with any corp I join is that it must be relaxed. Now, don’t confuse relaxed with lazy or un-motivated, for me relaxed means passionate, dedicated, yet understanding. I also want my new corp to have patience for the new guy which I still am.  I don’t have the skill points, ISK or experience of the majority of wormhole players – but I am very eager to learn.

How big should the corp be?

This is difficult for me to answer.  After being a part of two ‘startups’ I am convinced I want to join up with an established group this time.  I would like to be surrounded by active players, but I also don’t want to be lost in a crowd – I like the idea of a tight knit team, not a blobby rabble. What do you consider as optimum numbers?

What class of wormhole?

I feel I can survive very well in a c4 > c3 static. So I ‘think’ that’s what I am going to aim for.  I don’t think I am ready in any way shape or form for a higher class wormhole, but it’s something to work towards!

What are my ideal corp’s objectives?

I don’t want to join a carebear corp, but equally I don’t have the trader/industrial alts to supply me with a decent supply of isk to keep me in ships. So the corp I join must strike the balance between PvE for isk generation and PvP for isk destruction.

So to summarize: My current corp is closing down; I’m looking for a new one!

Thanks for reading, and as always – I appreciate any comments you may have!